Recently I re-connected with a friend. I hope I can call Shaquielle a friend. We haven’t seen each other for several years, and we only spent one month hanging out together. After that I plead guilty to losing touch with him. It is because of Shaquielle, though, that I have a favorite new sports league to follow; the Turkish Basketball League. And I love it.

Let’s backtrack a little. Several years ago I made an independent film called “Rock Paper Scissors” (yeah, you can find the movie on Amazon, blah blah blah, I’m not here to promote the movie…okay, maybe a little….but no….but yes…but no).

In the film I play a high school basketball coach. I was also directing and producing the film, and I struggled with the casting of the star player of the high school basketball team, a character nicknamed “Easy.” I wanted someone who could act, but really I wanted a real basketball player. I put out a few notices around the Seattle area, and found myself communicating with a gentleman who wanted me to take a look at his nephew, Laron Daniels.

I liked Laron and asked him to be in the movie. He said yes, and we went on with pre-production. We scheduled our first shoot day to include an outdoor scene where “Easy” and I, as player and coach, play some one-on-one at an outdoor court, trash-talking just enough to bond a little.

A couple days before shooting was set to begin, Laron backed out. He was worried that the project – and the acting – wasn’t quite right for him.

Making a film is a perilous venture. Anything that can go wrong, probably will, and a few things that can’t possibly go wrong, probably will also. I made some phone calls, and the gentleman who first suggested Laron told me over the phone, “I think I got someone for you. It’s Laron’s friend Shaquielle.” This was one day before we were scheduled to shoot our first scene.

I could have shut down the first shoot-day, rescheduled, and methodically problem-solved my casting dilemma. OR….I could roll the dice, say yes to Shaquielle over the phone, and open myself – and my whole film – up to the randomness of the unknown.

I said yes. I met Shaquielle for the very first time the next day, when he showed up for the outdoor one-on-one scene. He didn’t even know what the story was about. I just told him, “Let’s just play. Be yourself. Oh, and let’s trash talk a little.”

It was a risky decision, but it worked out beautifully, and Shaquielle turned out to be a pretty good actor. He made the character his own, and seemed happy to oblige me, in a later scene, shot a few weeks later, when I told him, “Just go for it. Tell me I suck as a coach.” He nailed the scene. I still feel a little pain if I see that scene (it’s in the long trailer on youtube…..but I’m not here to promote the movie…but yes….but no….).

(A few pictures from the shoot) 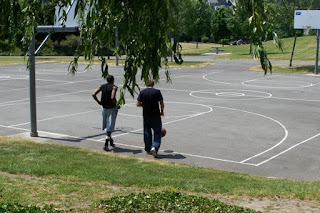 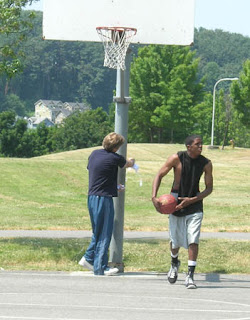 Then I lost touch with Shaqiuelle.

It turns out he was going through a lot of personal turmoil over the next few years. I won’t go into detail – you can find all the background on him if you want; It’s out there. Eventually he landed at Arizona State University, where he played for 2 years, and then went undrafted in the 2015 NBA draft.

There is no shame in this. I’ve hung out just a little bit on the fringes of the professional sports world (in the past I’ve played in a soccer league with and against ex-professionals, and I’ve definitely played both soccer and basketball with WANNA-be professionals). It is a brutal world, with limited openings, behind-the-scenes politics, and very demanding standards. I remember talking with a graduating wide-receiver on the University of Washington Huskies football team, several years ago, and he opened my eyes to the brutal honesty Pro scouts use when they come into the locker room. If they don’t make eye contact with you, you know you aren’t going to be drafted. And the vast majority of college athletes – even at the top schools – experience this let-down.

Shaquielle is driven, though. He played in Italy (hey, Kobe Bryant and his dad know something about that league), South Korea, and now in Turkey. He has also played the last 2 summers of NBA Summer League.

I connected with him over Twitter recently. I didn’t know what to expect, whether he would respond, or even notice. I never really knew what role the film played in his life. It was probably just a passing novelty for him. He had bigger things to deal with. He responded, though, and I want to thank Shaquielle McKissic for bringing the Turkish Basketball League into my world. It’s not a weird thing at all to me. I follow soccer leagues in four different countries; England, Spain, Italy, and the United States (yes,  I am an unapologetic MLS fan – GO SOUNDERS!). Why not add Turkey to the basketball leagues I follow?

Really, though, my message to the NBA is, GIVE THIS GUY A ROSTER SPOT! Come on, what’s a guy got to do? Does this help? I’m pasting a link at the bottom of this post to a recent Turkish TV Top-ten-plays-of-the-week segment. Guess who’s number 1. Is there any doubt?