NOTE: Peter Wick's book, The Past is Going to Suck - A Time Travelers Guide: The 20th Century, will be published August 24, 2018. Check this space in the final weeks before, for updates about pre-orders

The 1950's were either the most absurd period in the history of humankind, or THE BEST OF TIMES, to be revered and honored forever.

Let's break things down to make it easier to keep track.

-The Quarter Pounder with Cheese.

All seasoned by the eternal daily threat of complete and total nuclear annihilation.

How about starting at a drive-in diner for some milk shakes. Then try a drive-in movie, to make out in the back seat of yor car with your 'main squeeze.' Then practice some "Duck and Cover" to survive the coming nuclear apocalypse under your desk 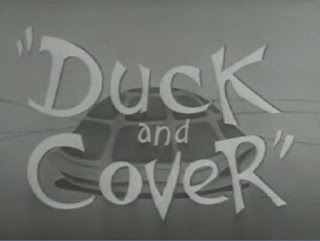 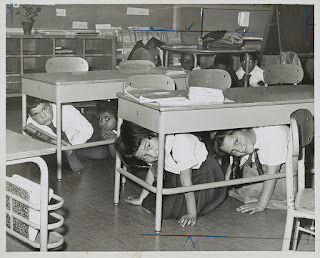 Very funny! Come on, people! this did NOT originally happen! Some sick practical joke played on the 20th century by time travelers...