This is the last picture I ever took of Bella, earlier this year: 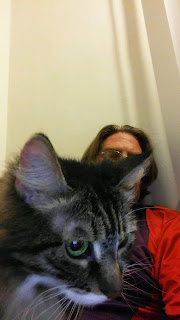 She just made it to the age of 13 this month, before fading away in what I want to believe was a peaceful final few days. I like the picture. Even though it's from her final year, she looks healthy to me. She doesn't seem to show any of the signs of fading that seemed to hit her suddenly at the end.

In her final year she still had the ability to jump, often amazing me with her skill and dexterity.

I probably didn't feed her as well as I could have. Friends told me from the beginning that the grocery store food I was giving her - and her brother Bailey (more on him shortly) - was like a lifelong diet of fast food for a cat.

I'm sure it didn't help that I would often sit with her on my lap, in the evening, as I munched on some sort of chips, and occasionally gave in to her pleading demands to let her lick the salt off my fingertips. I tried to say no most of the time, but I admit that I gave in once in a while.

Bailey was her twin brother. I adopted them as kittens, impulsively, in 2004.

I am using the following 2 pictures without permission, because I am out of touch with Natalie, and I can only hope she is alright with me using these 2 pictures from either late 2004 or early 2005. Natalie has Bailey on her lap, and she took the picture of me with Bella. I think the pictures are a few months apart (Bailey looks like 7 or 8 months old, Bella probably just 3 or 4 months) but they are definitely both from the first year of their lives. 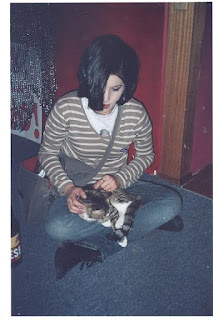 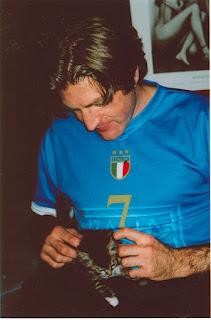 I turned these two cats into travelers. Beginning in 2007 I split my time between Seattle and L.A. before finally settling in L.A full time in 2012. I have to think back and calculate, but I am pretty sure that the cats traveled in a car with me, up or down the west coast at least a dozen times. They were loose in the car, in the back seat. Bailey was always more high strung. It took him longer to accept being in a moving car. Bella, on the other hand, came to accept what was happening after the second or third trip. I remember her settling down into the back seat, curled loosely,looking peaceful and calm, as we set out from Seattle one time. It was quite clear that she knew exactly what was happening, and she was okay with it.

Bailey's life ended with a little more trauma than Bella's. He was just short of turning 10, in the Summer of 2014, when a blood clot found its way through his body until it paralyzed his hind legs.

After her brother passed, Bella's final 3 years chugged along without incident.

I have been reading about the expected lifespan of cats - that Bailey's close-to-10-years equated to about a 50 year-old person.

Bella was on par with a 60-something person.

The end of Bella's run in life got me thinking about pets.

Maybe I've been struggling with my casual approach to life with Bella. Maybe I worry I could have done something to prolong her life.

I asked my friend Smitty what pet he remembers the most and how long it lived. He responded with this:

"The dog Molly died in 2011 and I think she was 17, perhaps older, as her past was not known. She was found injured in the wilderness by some nice person. Why she was there we don't know."

Then Smitty went on; and if you know Smitty at all, some of this description is absolutely hilarious;

"She was the pet most like me; aggressive, smart, and crazy. She even had a sense of humor. She would growl in a crazed demonic voice, and then 'laugh,' like she knew she was playing."

Outside, walking down the street this week, I definitely pay more attention to people out walking their dogs. I look at the dog, and the person, and find myself wondering about their pet-human relationship. I want to read the pair. I want to get some sense of what they mean to each other.

But I'm just going to sit here quietly a little longer, dealing with my fantom impulses to look up where she should be.